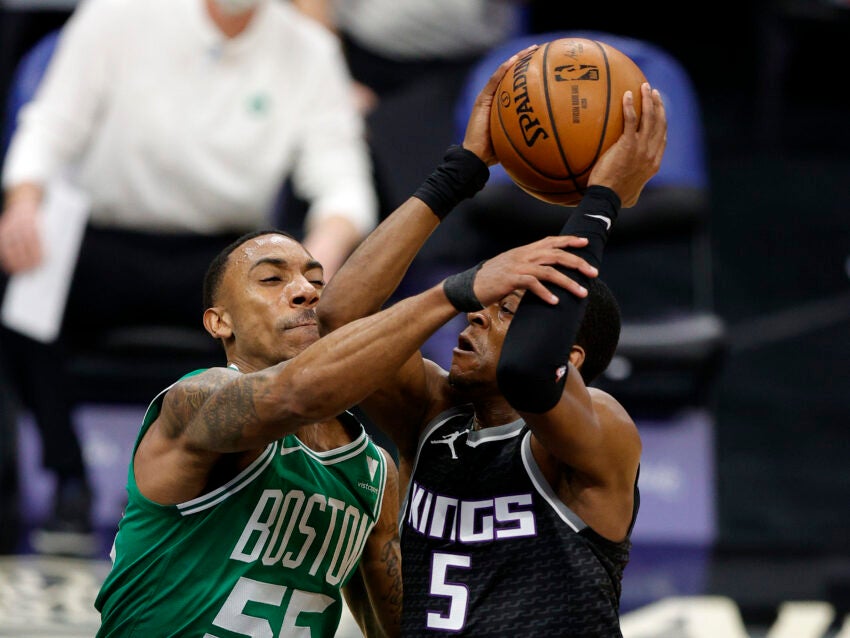 The Boston Celtics lost a chaotic game to the Sacramento Kings on Wednesday, falling 116-111 after a near-costly shot-clock malfunction, an intentionally missed free throw that nearly worked, and yet another blown lead late.

Five takeaways as the short-handed Celtics came up… short.

The Celtics’ fourth-quarter problems are something of a pattern.

In theory, the Celtics should be a very good fourth-quarter team. Jayson Tatum is deadly. Jaylen Brown has been blowing by defenders. Kemba Walker hasn’t completely shaken off his rust (and he didn’t play on Wednesday), but he has a history of excellence late as well.

So why do the Celtics keep blowing fourth-quarter leads? On Wednesday, De’Aaron Fox scored repeatedly, Hassan Whiteside punished Boston with his size, and the Celtics’ offense seemed to blow a tire. On the second night of a back-to-back with no Kemba Walker or Marcus Smart (or Payton Pritchard), perhaps Brad Stevens’ lack of concern post-game makes sense.

“I thought our guys gave good effort,” Stevens said. “We struggled to get stops late but the last two quarters they made a lot of tough plays.”

Tristan Thompson finding his footing is a solid sign.

Thompson’s emergence over the last few games has been an encouraging sign for the Celtics. On Wednesday, Thompson finished with 17 points on 7-for-9 shooting.

Thompson won’t be asked to do much offensively — just finish put-backs and score in the paint when defenders zero in on Boston’s stars in the pick-and-roll. The Celtics also have other bigs if Thompson doesn’t contribute — despite his success, he didn’t play in the fourth quarter (Stevens said postgame he liked what Rob Williams brought to the table).

But judging Thompson off the first quarter of his season — on a new team for the first time, adjusting to new teammates — probably wasn’t reasonable. Offensively, Thompson provides some value if he forces defenses to think twice.

During the NBC Sports Boston broadcast, Kings forward Harrison Barnes was batted around extensively as a possible trade target for the Celtics. A big wing who can defend multiple positions, Barnes has championship pedigree and would provide a steady, two-way veteran presence

Barnes has been a popular name among fans. The Celtics would need to attach some salary with any draft compensation since they are hard-capped, but the traded-player exception would help quite a bit.

Could it happen? Maybe. Will it? Who knows. Fake trades are difficult to predict since real trades are incredibly difficult to execute in the NBA, and any amount of speculation often ends up circling back to the same 4-5 players. Barnes makes sense for the Celtics, but betting the field is always a good call when evaluating specific targets.

The Celtics struggled without Jayson Tatum.

Predictably, the Celtics struggled without Jayson Tatum in the game. Jaylen Brown has been a superstar this season, but his minutes have been best when combined with Marcus Smart (who, obviously, is out for a while). When Tatum went out of the game on Wednesday, the Celtics’ offense looked ragged. When he was in, the offense was more coherent.

Interestingly, the Celtics were bad without Tatum even though Tatum shot poorly for much of the game (27 points, 11-for-26 shooting). Part of the Celtics’ struggles were the dire point-guard situation (more on that in a minute), forcing Tatum to be used for much of the game as a secondary ball-handler — in addition to being the primary scorer. But the Celtics really need more from other contributors.

Jeff Teague finished with seven points on 1-for-6 shooting from the field. Simply plugging him in with the starters didn’t do much for Boston on either end — in theory, Teague should provide spacing but defenses understandably don’t respect his 36 percent shooting in the paint and restricted area, so he doesn’t collapse effectively.

Tremont Waters, meanwhile, had a nightmarish performance — three points, 1-for-8 from the floor. His shot selection has been questionable at times this year, as if he’s struggling to adjust from being the G-League Rookie of the Year/MVP candidate to a potential NBA contributor.

Payton Pritchard could return soon from his knee sprain. When he does, he presumably will be on a minutes restriction, but an argument can be made for him to take over the secondary point-guard role behind Kemba Walker. Teague’s continued offensive struggles are less than encouraging, and Pritchard is a pesky defender.

In any case, the Celtics will welcome whatever health they can get it. Playing short-handed on the second night of a back-to-back looked like a struggle.

Larry Magid: How to maximize your home internet speed