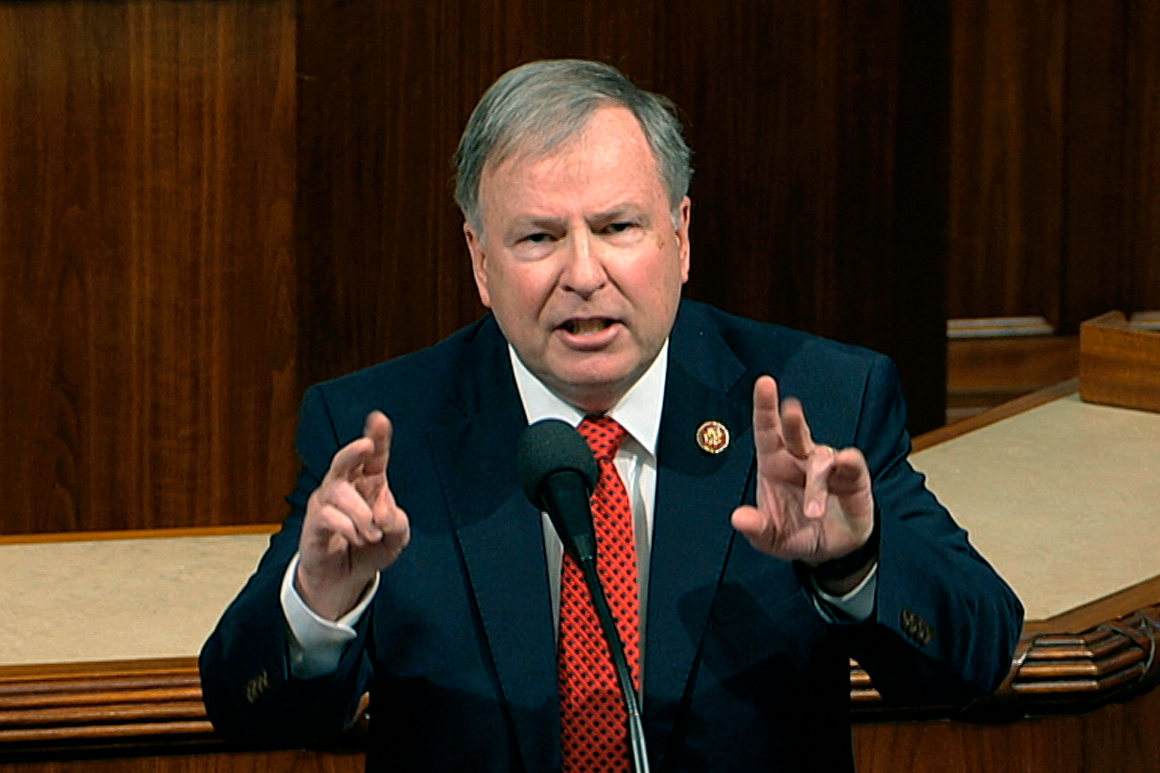 Pope — a Marine veteran who started with Lamborn as a Wounded Warrior fellow before being promoted to defense policy adviser — claims in the suit that early in the pandemic, he raised safety concerns to a superior. He suggested teleworking or at least some social distancing in the office after hearing from colleagues who were worried about the health risks of in-person work because of immunocompromised family members. Those suggestions were ignored, Pope says.

According to Pope’s lawsuit, early on in the pandemic, when most congressional offices moved to remote work, Lamborn insisted that his staff continue to operate in-person — allegedly saying that he would not allow House leadership to dictate how he ran his office, and “belittl[ing] any staffer who raised health-related concerns.” When Pope suggested that one staffer with health conditions at least be afforded a “zip wall” to limit exposure to other staff, Lamborn denied those requests.

As late as April 2020, well after the World Health Organization declared a pandemic and many states had implemented stay-at-home orders, Lamborn allegedly told his staff that the pandemic was a “hoax” manufactured in an attempt to influence elections.

The lawsuit states that on or around Oct. 5, Lamborn was informed that his D.C.-based deputy chief of staff — with whom he had been working closely just days before — had tested positive for Covid-19, and that many others in his office were showing symptoms. Despite knowing this, and despite having slept in his office that week, the lawsuit alleges, Lamborn refused to self-isolate, going about his normal business and in-district work schedule, including attending a campaign event and military shipyard tour in the days that followed.

Within days, with more staffers testing positive, Lamborn had to shut down his D.C. office. But he required his district staff to continue to come to work in-person.

Contradicting contact-tracing guidelines, Lamborn allegedly told his staff not to tell anyone about their cases, “including their families, roommates and friends” with whom they came into physical contact — lest the media pick up on the office’s Covid problem.

On Nov. 18, just days after an in-person staff briefing with Lamborn, Pope learned that the congressman and two additional staffers who had been in the meeting had contracted the virus — though Pope learned this from third parties, not Lamborn or the two employees. On Nov. 19, Pope tested positive for the virus as well, and “he contends that Representative Lamborn was the direct or indirect cause of his infection,” according to the lawsuit.

Pope says he continued to raise alarms about the danger posed to the staff until Dec. 7, when he claims he was terminated for “alleged lack of professionalism and abrasiveness toward his colleagues and supervisors.”

In response to a request for comment from Representative Lamborn, his spokeswoman said, “The workplace safety allegations made by Mr. Pope are unsubstantiated and did not result in the termination of his employment. Congressman Lamborn looks forward to full vindication as all facts come to light.”

In a bid to establish that Lamborn “consistently disregarded ethical rules and norms” in Congress, the lawsuit includes several other allegations. Among them:

— Lamborn allowed his son to live in a storage area in the basement of the U.S. Capitol for several weeks when he moved to Washington D.C.;
— Lamborn’s taxpayer-funded congressional staffers had to help the congressman’s son apply for federal jobs, prepared him for job interviews with mock questions and “help[ed] him craft his [interview] responses”;
— Lamborn’s staffers ran personal errands for his family, including moving furniture for the congressman’s vacation home, setting up a video telecom system at his home and picking up personal mail while Lamborn was on vacation;
— Staff were instructed to use their official time to perform campaign work, “including preparing campaign mailings, purchasing supplies and preparing for campaign events like the campaign party on primary night.”

a Goal from St. Louis Blues vs. Minnesota Wild

'It’s an honor to grace the ring with him': Logan Paul holds his own in boxing match vs. Floyd Mayweather