For years, Joel Embiid’s fitness level concerned Philadelphia 76ers coaches and management. During his first season with the team, which he missed with a fracture in his foot, the Sixers started sending staffers to his apartment to stock his fridge with healthy food to counter his weight gain of 50 pounds. These issues would plague Embiid over the next four years and reach a crescendo down the stretch of the 2018-19 season.

With his left knee plagued by tendinitis, Embiid was forced to miss 14 of the Sixers’ final 24 regular-season games. The injury sapped his conditioning, and on those days that he did suit up, he looked sluggish. That April, while in Miami and just a few hours before tip-off for Philly’s second-to-last game of the season, then-Sixers head coach Brett Brown called his medical and training staff into a meeting.

“We’re all going to get fired because Joel’s out of shape!” Brown shouted, according to multiple people familiar with the interaction.

Conversations about Embiid’s fitness often devolve into a chicken-or-the-egg debate. Was it really his fault that the Sixers were outscored by 109 points in the 99 minutes he didn’t play during their second-round loss to the eventual-champion Toronto Raptors a couple months later? Perhaps not. But Embiid has struggled the two times he’s reached the playoffs’ second round: 17.6 points per game on 37 percent shooting against the Raptors; 23 points per game on 44 percent shooting against the Celtics in 2018. Brown, like many others around the Sixers and the NBA, felt that Embiid had to be better if the Sixers were ever going to grow from a good team into a great one.

So far this season, Embiid has done exactly that, making the leap from the periphery of the MVP conversation to the center of it. Embiid is averaging a career-best 29.3 points per game. He owns the league’s best player efficiency rating, and he’s sitting just barely behind Mike Conley in FiveThirtyEight’s total RAPTOR metric. He’s hovering around the heralded 50-40-90 club (55.3 percent on field goals, 39 percent on 3-pointers, 85 percent on free throws), which would place him in an exclusive group populated by only eight players — almost all of them all-time great snipers. His combination of usage (north of 30 percent) and efficiency (north of 65 percent) is one we’ve seen only once before: during Stephen Curry’s electric 2015-16 campaign, which ended with Curry as the league’s first unanimous MVP. Thanks to Embiid’s stellar play, the Sixers own the Eastern Conference’s top record at 17-7. More impressively, they’ve gone 16-3 in games when Embiid plays.

Of course, these sorts of jumps don’t happen within a vacuum. New team president Daryl Morey’s decision, for example, to bring in shooters like Seth Curry and Danny Green has gifted Embiid with more space than he’s ever had. But the greatest catalyst may be this: Embiid is playing like a man in the best physical shape of his career.

Embiid has downplayed the impact his shape has had on the team. “I think a lot of you guys make too much of a big deal out of it,” he said during a recent Zoom press conference. “If we’re playing bad, I’m sure everybody would be talking about, ‘Oh, he’s got to get in better shape,’ but [we’re] playing well, so they can’t say anything.”

But look all over the court and you can see examples — and find statistical proof — of Embiid playing with more burst and energy. He’s never been more effective at contesting shots. His foul rate has plummeted. According to Cleaning the Glass, opponents are running less frequently off Sixers misses with Embiid on the floor than they are with him off the floor; last season, teams pushed the pace more with Embiid in the game. All this tells the story of a locked-in defender rarely finding himself beaten down the court or in poor defensive position.

Embiid has been at the center of this turnaround. Everything the Sixers do on defense revolves around his ability — through his unique combination of size, quick feet and basketball IQ — to both control the paint and wall off the path to the rim. In fourth quarters this season, he’s done exactly that. According to NBA.com, opponents have shot just 37.8 percent on fourth-quarter attempts when he’s the closest defender, a mark that would easily be a career best.

Embiid is playing with more verve on offense, too. He’s getting to the free-throw line at a record pace, and his ratio of free throws attempted per field goal attempted actually climbs during the fourth quarter. In other words, he’s attacking, not settling, especially down the stretch. He’s also converting a greater percentage of his fourth-quarter attempts from the charity stripe (86.1 percent), another sign of improved conditioning. Embiid has always boasted a smooth stroke and soft touch; the difference this season is that his legs don’t abandon him. 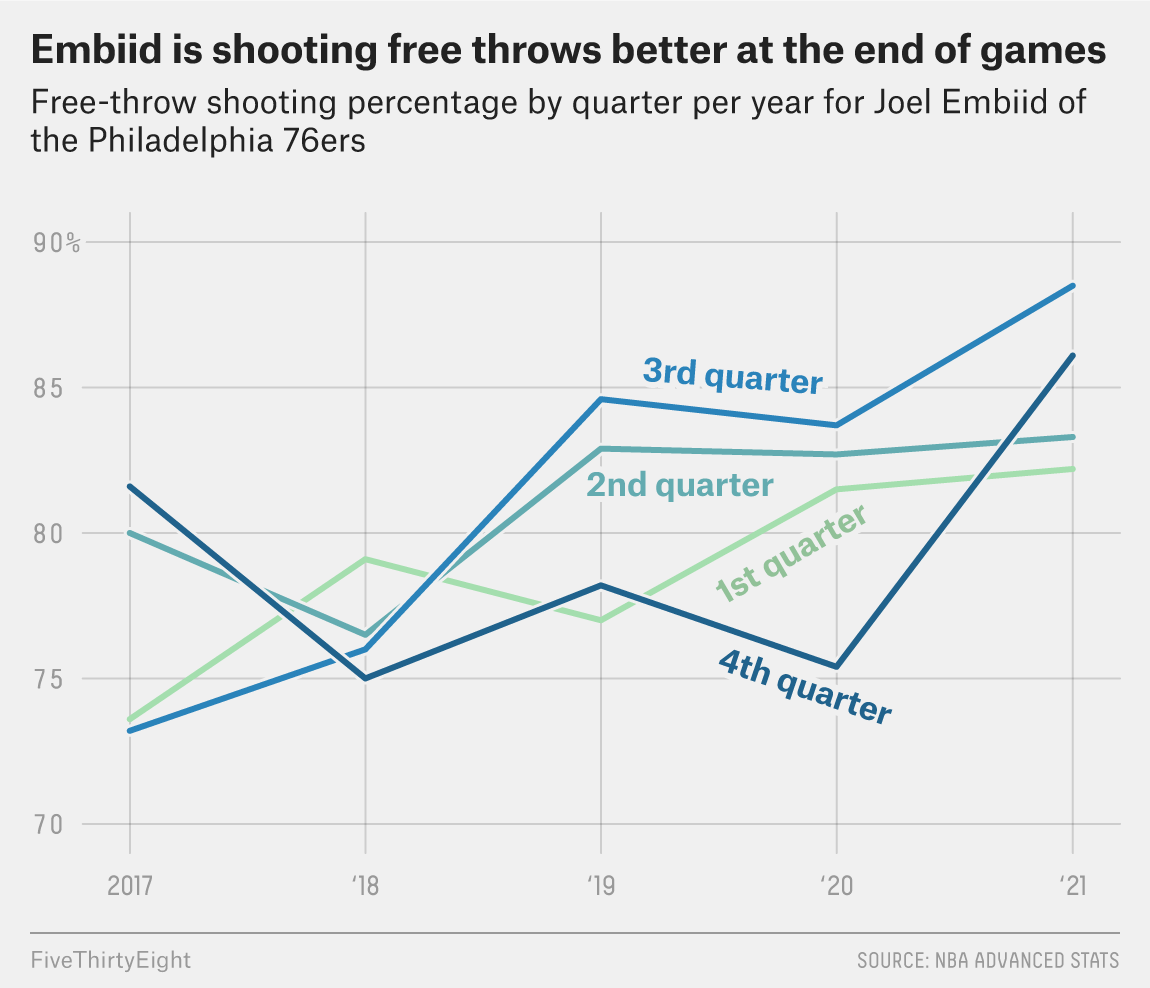 None of this has occurred by happenstance. Embiid spent the offseason training in Philadelphia with Drew Hanlen, his personal trainer, and Chris Babcock, a longtime Sixers player development coach. He hired a chef, nutritionist, physical therapist and massage therapist full time, too. “Just doing whatever I can to take care of my body so I’m able to play 20 years here in Philly,” Embiid said in December.

Hanlen said the group drew up a new workout regimen for Embiid to practice individual moves in sets. First, Embiid would watch film of a specific move. Then, he’d refine the move in the half court. Then, Hanlen and Babcock would put a few minutes on the clock and have Embiid repeat the shot on both sides of the court while darting back and forth. Then, they’d add more time on the clock, and Embiid would run full-court sprints between shots. Sometimes they’d bring in young, spry assistant coaches to play Embiid full-court, one-on-one. The sessions would last nearly two hours. It was the rare offseason in which Embiid wasn’t recovering from surgery or an injury, and the group took advantage.

“We’d basically go until he passed out,” Hanlen said in a phone interview. “Sometimes I was getting, not yelled at, but told we were overloading a little bit. But he was the one that kept telling us to keep going.”

Embiid’s posture became a focus. “If he’s in better posture, then he’s playing with his hips lower, he’s in a better shooting position, when he drives he’s lower, he can absorb the bumps better and drive through contact,” Hanlen said. “It’s not just being able to run for a longer period of time. It’s more that he’s in a better position to do the things that make him such a great player. He’s able to stay in that posture throughout the game.”

This, Hanlen said, is a primary reason that Embiid has become one of the game’s deadliest midrange shooters. Embiid has drilled 60 percent of his long midrange shots, nearly double the 38 percent he connected on in each of the previous two seasons, according to Cleaning the Glass. Mastering this shot has made him unguardable. Crowd him, and he’ll scoot by for a dunk or draw a foul. Offer space, and he’ll rise up.

Of course, it’s still early in the season. Embiid is already dealing with a tight back and sore knee. In the end, the Sixers’ fate will come down to Embiid’s ability to remain active and healthy. To win a championship, they’re going to need him to play at this MVP level throughout the entire postseason, when games take place every other day and there are no easy marks. Who knows if he can. But for now, Sixers fans can look forward to the postseason with optimism, knowing that for the first time in his career, Embiid seems primed and prepared to do so.

Check out our latest NBA predictions.

The best tech for pets