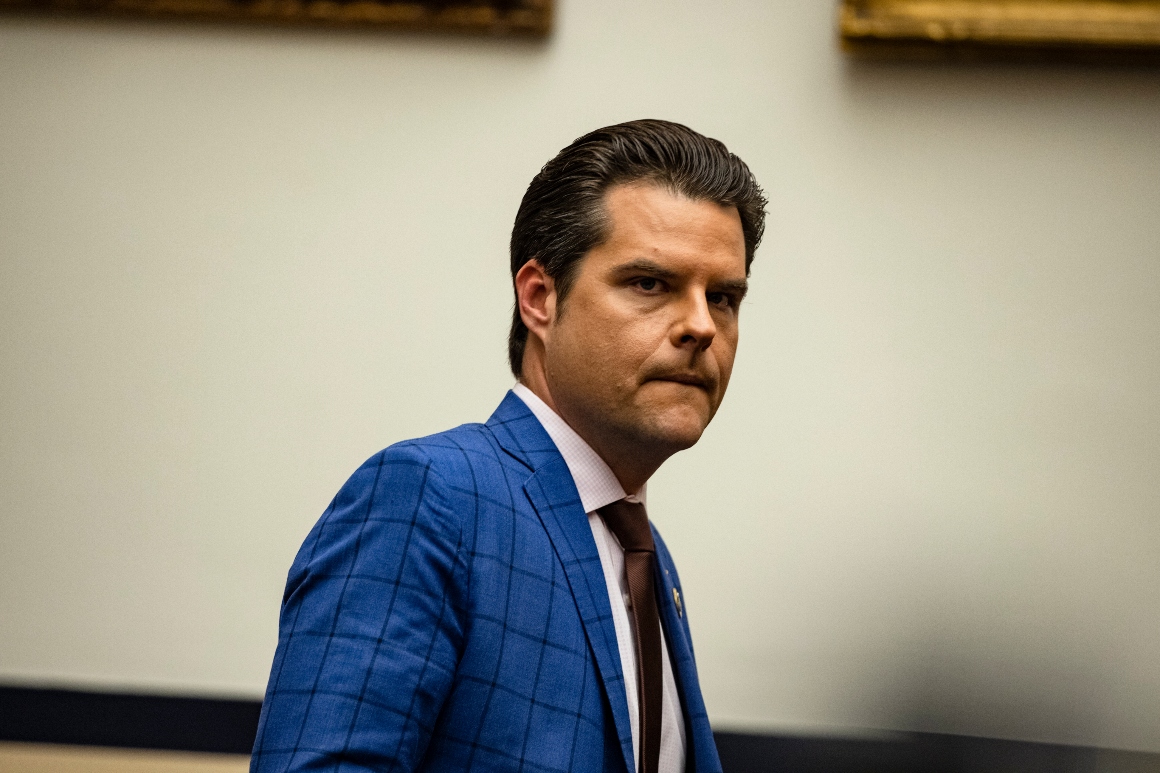 In a series of tweets, Gaetz said he and his family were the victims of an extortion scheme. The congressmember provided POLITICO with a series of documents that he said supported his allegation of extortion, but none could be immediately verified.

“Over the past several weeks my family and I have been victims of an organized criminal extortion involving a former DOJ official seeking $25 million while threatening to smear my name,” he said on Twitter.

His family has been cooperating with federal authorities, he said, adding that his father had been “wearing a wire at the FBI’s direction to catch these criminals.” He said a Tuesday report by The New York Times was an attempt to “thwart that investigation,” and demanded that the Justice Department release those recordings to clear his name.

In an interview with Tucker Carlson on Fox News, Gaetz said that the 17-year-old “doesn’t exist” and that his father was supposed to pay a $4.5 million down payment to the former Justice Department official — whom he named on the show — on Wednesday to make the allegations “go away.”

But as Gaetz explained the complex extortion plot, which he said included nonexistent pictures of him with child prostitutes, even Carlson seemed to be confused, especially over the sex trafficking charge that the congressman flatly denied.

“That was one of the weirdest interviews I have ever conducted,” the Fox host said when his show came back from commercial break. “Don’t quite understand it but we will bring you more when we find out,” he added.

Gaetz himself told Axios earlier on Tuesday that he was “unclear” about the specifics of the allegations that were being made against him, and said that he was told “very little.” However, he said that he was “absolutely” confident that none of the women he’d been involved with were underage.

Gaetz’s denials followed the Times report on Tuesday that said the Justice Department was investigating whether the lawmaker, a Trump loyalist, had a sexual relationship with a 17-year-old and had paid for her to travel with him across state lines.

Those actions could violate federal sex trafficking laws, according to The Times, which cited three people briefed on the matter. No charges have been brought against Gaetz, according to the report.

Two of the sources told The Times that the investigation — focusing on events that took place about two years ago — began toward the close of the Trump presidency, and that senior Justice Department officials were told about the probe.

The investigation into Gaetz is part of a larger investigation into a former local Florida official and Gaetz ally, Joel Greenberg, who was indicted last summer on charges that included sex trafficking of a minor, the report said.

In response to the report, Rep. Ted Lieu (D-Calif.) called for Gaetz’s removal from the House Judiciary Committee, which oversees the Justice Department, pending the conclusion of the investigation. Gaetz pushed back in the Fox interview, however, and implied that he might be the victim of a partisan plot, especially given his image as an outspoken conservative firebrand.

“I believe we are in an era of our politics now, Tucker, where people are smeared to try to take them out of the conversation,” he said.

Axios had reported on Tuesday that Gaetz was considering early retirement from Congress to take a job at Newsmax, the conservative TV network. Gaetz told The Times that he was not planning to resign his House seat.

Kelly Hooper contributed to this report.