USPS' DeJoy to Congress: 'Get used to me' 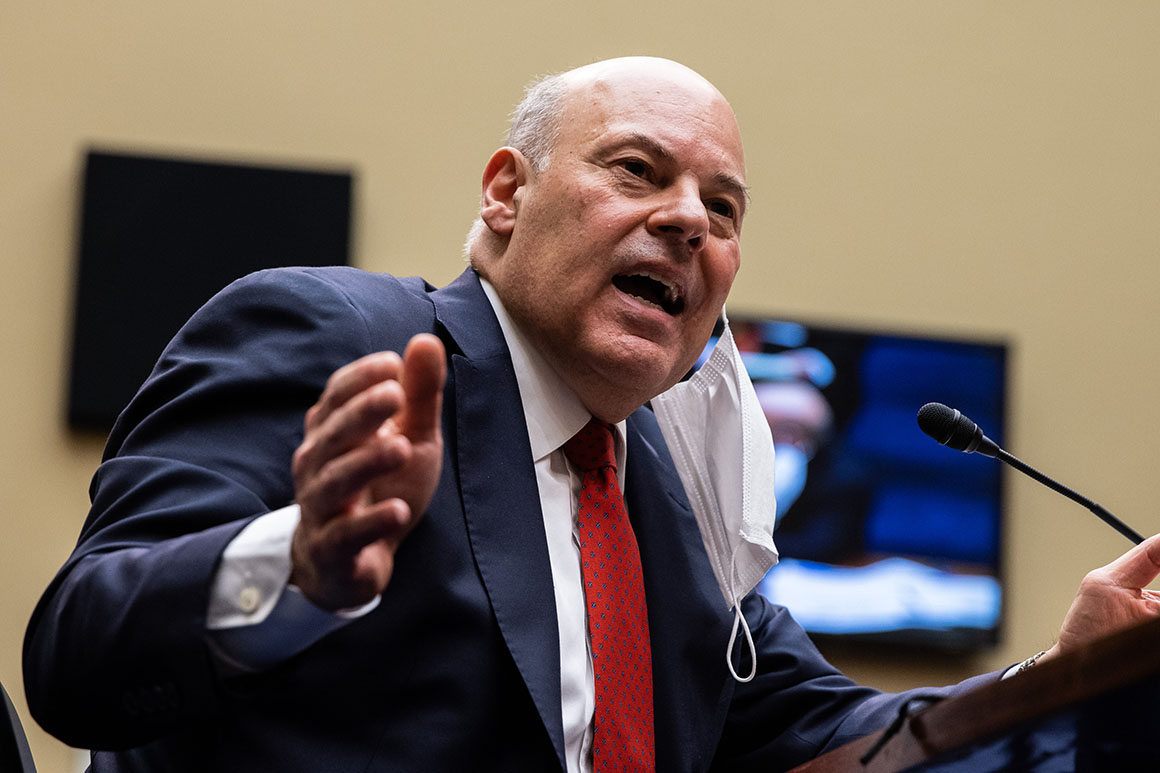 However, DeJoy’s resolve may be put to the test soon, as Biden nominated three people — Ron Stroman, Anton Hajjar and Amber McReynolds — to fill open seats on the board that determines the postmaster‘s fate, the White House announced on Wednesday afternoon. If confirmed, Democratic appointees would have a majority of the USPS Board of Governors’ nine-seat panel, potentially giving them the opportunity to get rid of DeJoy.

Stroman is a recently retired former deputy postmaster general, Hajjar is the former general counsel for the American Postal Workers Union, and McReynolds is chief operating officer at the nonprofit Vote at Home Institute.

The trio would also be a major step toward diversifying the board, as Stroman is Black, McReynolds is a woman and Hajjar is a legal adviser to the American-Arab Anti Discrimination Committee. All six of those serving on the panel now are men, five of them white.

At Wednesday’s hearing Rep. Cori Bush (D-Mo.) likened the current composition to a “millionaire white boys’ club,” in stark contrast to the postal service’s workforce, of whom she said about one-third are people of color.

DeJoy said the USPS “would love to have a diverse board,“ but noted that its membership is determined by the president and the Senate.

The postmaster general at times appeared perturbed by the line of questioning from members of Congress, as well as critical media coverage of him and the USPS during his watch.

DeJoy pointedly noted that he is not a presidential appointee, interjecting at one point to correct a Democratic committee member who characterized him as a “Trump holdover.”

“I’m not a political appointee,” he said. “I’d really appreciate if you’d get that straight.”

DeJoy’s comments came as he, Postal Board Chair Ron Bloom and other officials testified about the need for legislation to shore up the service’s financial position.

The USPS has reported billions in net losses annually in recent years, and Bloom testified that it is projected to lose roughly $160 billion over the next 10 years without significant reforms.

A proposal to require postal employees to enroll in Medicare, potentially saving more than $40 billion over the next decade, and eliminate a requirement that USPS pre-fund retirees’ health benefits was a rare point of agreement between DeJoy and others.

However, “it doesn’t solve the problem” on its own, DeJoy added.

“We are on a death spiral,” he said. “We cannot, even with this legislation, we cannot continue to lose money.”

DeJoy acknowledged that the postal service’s performance sagged last year, but said the USPS faces structural problems that have been glaring for years predating his appointment last year.

“The years of financial stress, underinvestment, unachievable service standards and lack of operational precision have resulted in a system that does not have adequate resiliency to adjust and adapt to changing circumstances,” he testified.

DeJoy told committee members that a strategic plan should be ready by sometime in March. But several possible changes he previewed — including lowering delivery standards for first-class mail and reducing use of airplanes to transport mail throughout the country — drew a chilly reception from Congress.

“It sounds like your solution to the problems you’ve identified is just surrender,” Rep. Jamie Raskin (D-M.d.) said. “You’re basically saying because the mail has been late under your leadership, we’re just going to change the standards and build it into the system.”

DeJoy disputed such characterizations, but testified that postal officials “are evaluating all service standards.” He also said the goal is to eliminate the service‘s budget deficit.

“We‘re not out to profit. We‘re out to break even,“ he said.

Republicans on the committee largely defended DeJoy and accused their Democratic counterparts of grandstanding and unfairly maligning the postmaster general and his attempts to reform the postal service.

“I wish we’d given you more credit for that instead of trying to second-guess you and nitpick and micromanage you,” Rep. Pete Sessions (R-Texas) said.

Republicans argued he was being scapegoated, particularly for how ballots were handled in the run-up to the November elections, a posture that at times led to testy exchanges between members of the committee.

Several of the changes implemented last year under DeJoy were halted in response to heated outrage over mounting delays. In October, the USPS’ internal watchdog determined that the shake-ups, combined with coronavirus-related staffing challenges, “negatively impacted the quality and timeliness of mail delivery.” The inspector general report also found shortcomings with how those policies were implemented.

For weeks Democrats have been pressuring Biden to take steps to remove DeJoy, and the president has vowed to swiftly appoint new members of the board that oversees the postmaster general. Some Democrats have even urged Biden to remove the entire board in order to fill it with people amenable to getting rid of DeJoy — a dramatic move that legal experts say might not hold up in court.

The postmaster general previously testified before Congress in the fall as concerns mounted about lengthy delays in the delivery of paychecks, medication and other critical mail. At the time, Democrats also worried about the effect the declining performance would have on voting by mail, and even accused DeJoy of seeking to sway the election in favor of Trump.

Multan beats Lahore by 7 wickets for 1st win in PSL